an open letter to Weather.com how Google+ makes you feel like an assh*le

It’s been ages since we’ve talked. Of course, “ages” between the two of us is actually less than 24 hours. Remember yesterday? When my site crashed–something about the Apache server needing repair? Oh the sweet, sweet memories.

As an aside, I have to say, “Apache” is a pretty tough name for such a terrible server. Maybe you should call it the “Slowy McBreaks-a-lot” server from now on. Just a thought.

Anyway. You must have missed me, because my server is down again! I know how much you enjoy our long talks, but these server crashes are not the right way to get a girl’s attention.

What’s that? You’re not obsessed with me and trying to instigate an interaction? How else can you explain all of the server crashes that have resulted in our hour-long chats? This is the stuff romantic comedies are made of! I mean, I would have thought that by now you would have my server running smoothly due to your heartfelt devotion to me, but maybe you’re not the Lloyd Dobler kind of romantic. Maybe you don’t want to make being with me your job.

Maybe this isn’t a romance at all, and you’re going all Revenge of the Sith on me. Admittedly, I don’t even really know what that would mean, but it just sounds like something you would do.

The point is: Server crashes have become a pretty regular occurrence since I’ve joined your service a short 6 months ago. I can’t say for certain how many times I’ve experienced crashes, since I have trouble counting when I’m blinded by rage, but I can say that this is at least the 26th outage I’ve had. It’s the fourth this week.

You may think that you’re helping. I know how some people enjoy the drama of “Will the service I pay for work today?” But not me. Thanks for trying to add some excitement to my life, but I manage to induce plenty of catastrophes without your services.

For example, I’m in the middle of trying to move to a new state, which is SUPER stressful. And I don’t even like the state I’m moving to that much, but I have to go because my husband got a job there. And the job, incidentally, starts in a month. AND WE HAVE NO PLACE TO LIVE! LOL!

I’m sure we can move in with my mother-in-law for a few weeks, because we’re moving back to my hometown, which means I’m going to be dealing with my parents and people I went to high school with a lot more than I’d like. But living with an in-law introduces all kinds of new stresses, and if I had to deal with those stresses AND your ridiculously unreliable service, I’d probably wind up on a bell tower somewhere.

Which reminds me: Do you sponsor criminal breakdowns? I’ve noticed that you sponsor some bloggers (who never seem to experience downtimes, btw. KU-DOS) but I wasn’t sure what your policy is regarding the sponsorship of rage-induced hysteria inspired by your products and services? Not sure? It’s Ok; you can get back to me on that.

Don’t get me wrong. Things haven’t been all bad. Remember that time you moved my site to a new address? FOR FREE! And the time you comped me a few months of service for all of the trouble I was having? That was awesome. Was that the honeymoon period? Have we already moved onto the part of our relationship where you fart a lot and
stop clipping your toenails ? Where’s the romance? I need you to show me a little passion.

And in the meantime, if you could get your act together on this whole “service that I pay you for” thing, that’d be swell.

This part isn’t in the letter, but the complete absence of drawings in this post probably has some of you are feeling cheated right now. And I don’t want that.

So I drew you this: 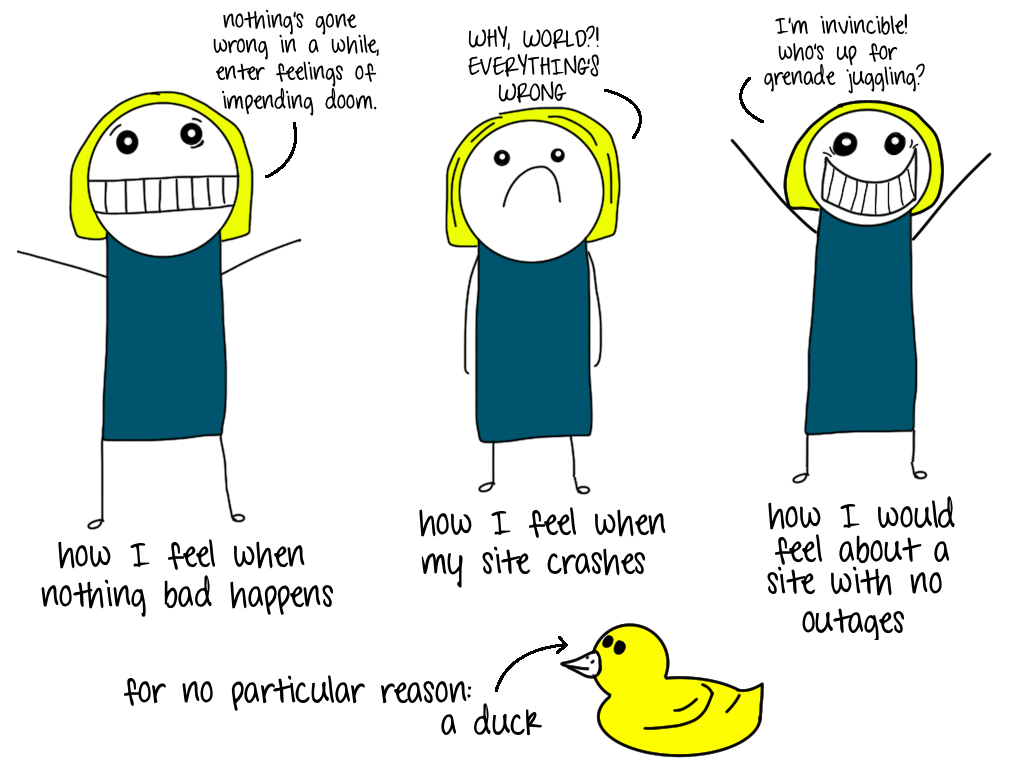 I have already received a response from my host assuring me that they are on the case and interested in maintaining our romance. At least they have a good sense of humor. Or they did before they realized I was going to post this letter?

Here’s their response (posted with permission):

So glad to hear from you!  It has been ages and I had missed you so much!

It’s hard to admit, but I am obsessed with you. I send multiple packets toward your server at least every 5 minutes just to make sure you’re up and running. Some places call that stalking, I call it caring, but really, what’s the difference?

I really didn’t think it would have went like this. I had imagined you making casseroles while I cleaned the gutters, and eventually we’d setup play dates with our neighbor’s children. Did you want children? I can’t remember if we talked about that yet, but there’s still plenty of time to figure that out.

I have found that excitement is key to a relationship. Not that I’ve had a serious relationship recently (my wife won’t let me) but that’s what I read online, from my basement, with the lights out. I thought it added some flare and brings back some of the spark that glows so bright, but fades so quickly.

While you pack up the boxes in preparation for living with your mother in law, I’m going to personally monitor your machine for rest of my shift, which is still several hours. If I see anything I will take action and do my best. We really do need to get this resolved for you.

I’ll be sure to update you with my findings.