how to make a bowl of cereal in 12 easy steps you guys, I’m pretty sure we did it wrong

why I won’t be naming my first born after WebMD

I like choose-your-own-adventure books. I LOVE the Internet. I think medicine is pretty great–I especially like it when it’s healing me from illnesses. You would think that pushing all three of these things together might create some kind of magical machine of wonder.

I imagine this is what the creators of WebMD must have been thinking.

Given the ingredients, I can’t say I fault them for expecting their “Symptom Checker” to be a helpful tool. And perhaps, in the right hands, it is.

In my hands, however, WebMD’s Symptom Checker is like lighter fluid to an open flame.

I had always suspected WebMD was somehow conspiring to trick me out of my sanity, but the evidence become irrefutable a few years ago.

I can’t remember exactly what I was doing that fateful day in February, but knowing myself, it was probably something along the lines of: spending quality time with the television. 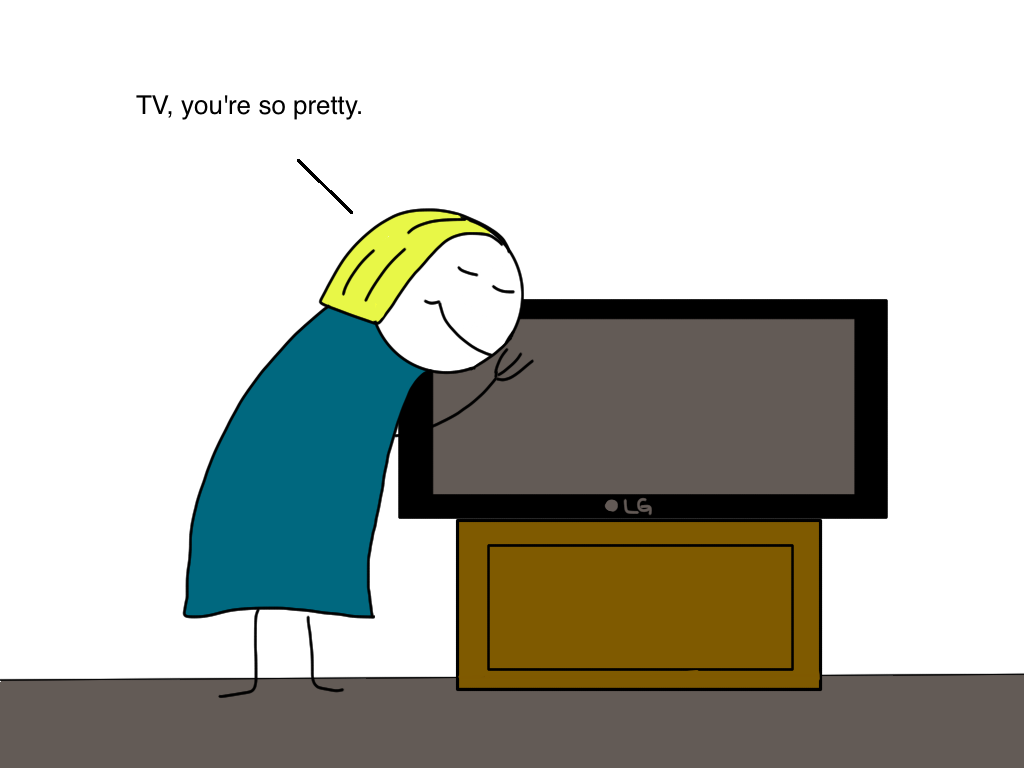 While the matter of whether or not I was giving my television a best friend hug may be up for debate, here’s what I’m certain is the stone-cold truth: The blissful quiet of my life was interrupted that afternoon by a muffled and repetitive sound. 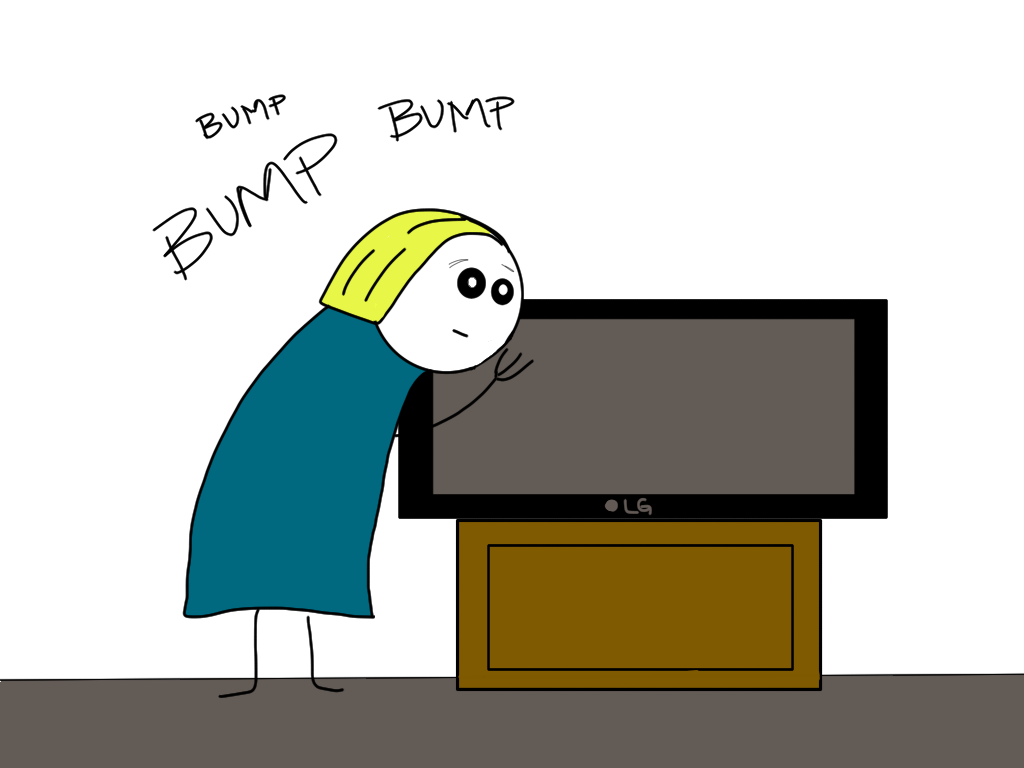 Certain the noise was bass coming from a neighboring apartment, I was immediately incensed.

At this time, the Mr and I were living in an apartment complex that was overrun with graduate students. We had thought nothing of the grad student infestation when we signed the lease, because the Mr was a grad student himself. It quickly became clear, however, that not all grad students are like the Mr and, more importantly, that we were sharing walls with people who were slightly less well mannered than wild jackals.

Jackals that enjoyed playing loud, thumping music as the soundtrack to their evening gatherings. Rap and pop music with bass lines turned up so loud and thumping so relentlessly that they could find you anywhere in a two mile radius and accost your ears.

Sort of like Chinese water torture–but with more Ke$ha.

And at 3:30 A.M. that morning, approximately eight hours after the bumping started, I wanted those jackals dead. Strung up by their tails. 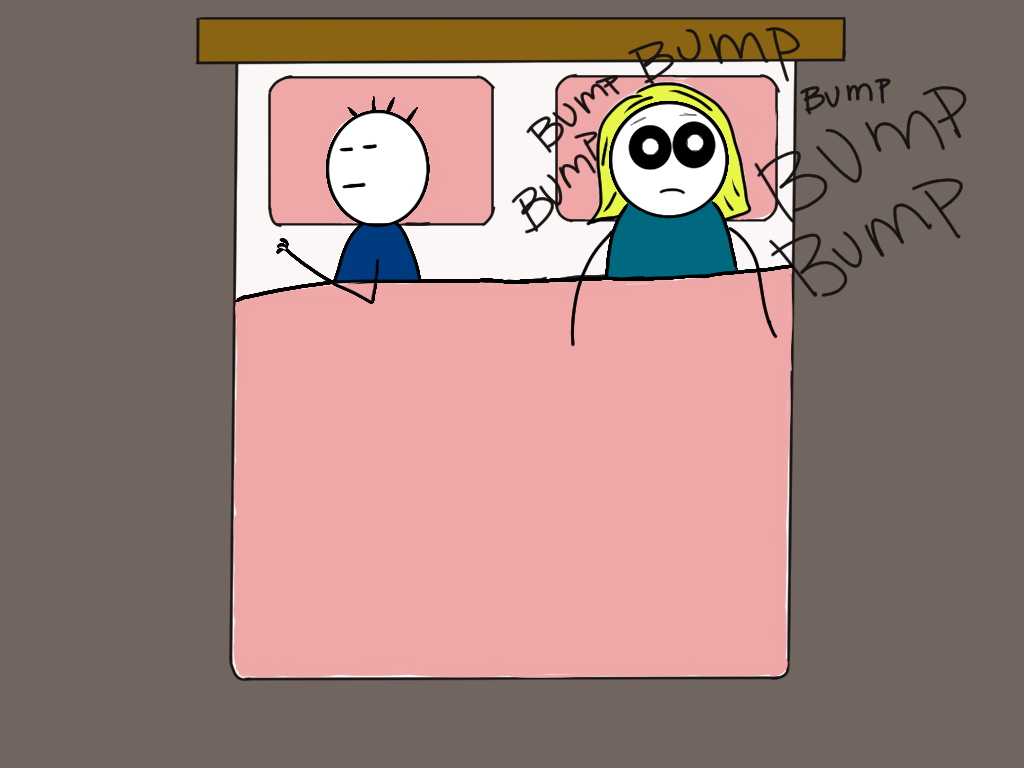 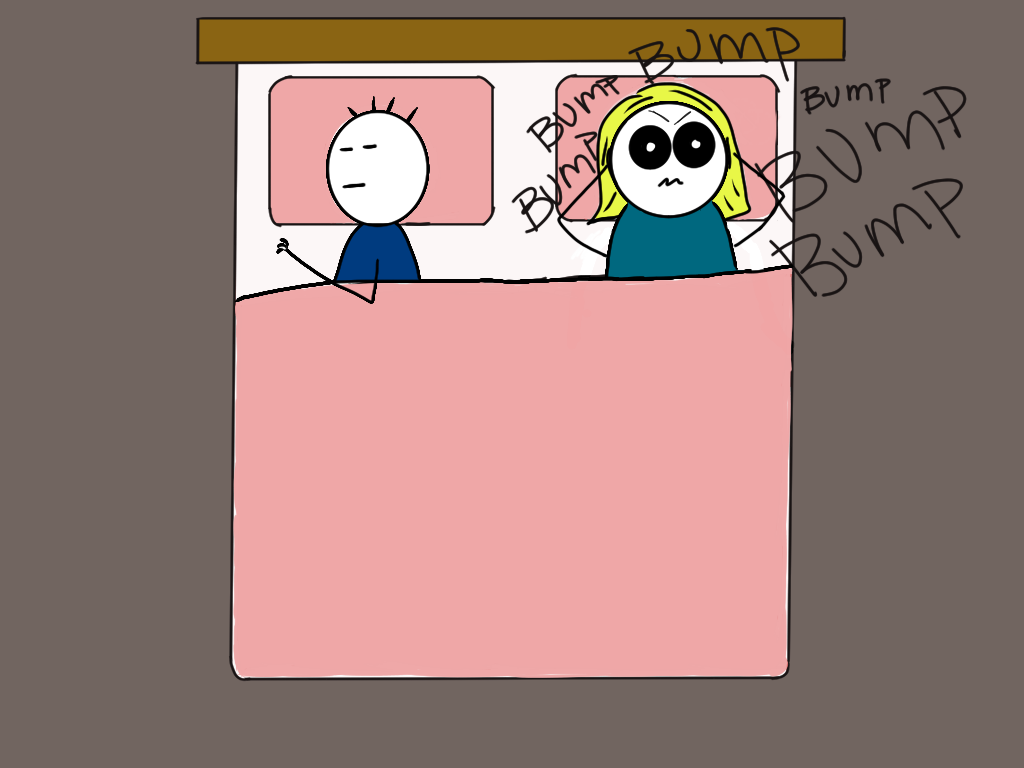 Hourly calls to my leasing office proved useless, and around 7:00 the next morning, when I had to crawl out of bed for work I was plotting to find these people, duct tape them to the top of a rocket ship and expel them from the earth. I wanted to unleash on them a fury of pain and nail scratching, unmatched by anything they had ever felt or imagined.

I hadn’t slept all night, and someone would have to PAY!

The pure volume and intensity of my hatred for these inconsiderate hyenas blinded me as I dragged myself through my morning routine, to my car, across town and finally, to my office.

But when I got to my desk at work… 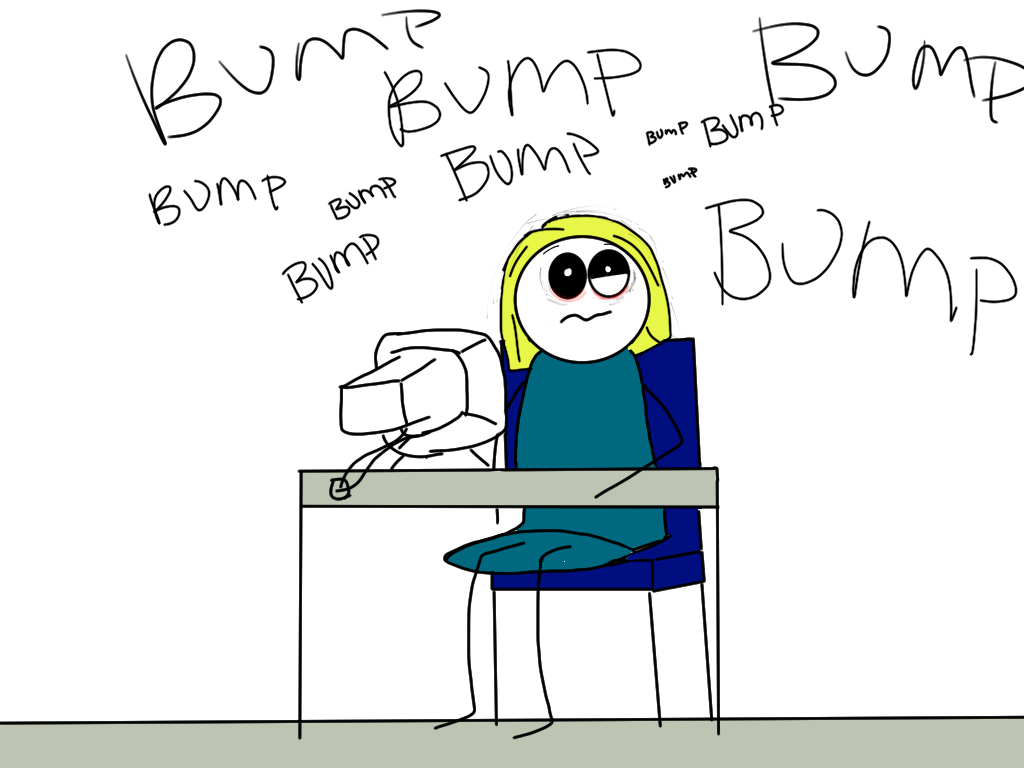 The noise had followed me.

You know what’s not a great way to cultivate a dignified professional identity? Walking around the office asking co-workers if they can hear noises, too.

It was around this time that I started to worry that:

1. Something was wrong with me.

2. No one would be able to cure me, and this noise would last for the rest of my life.

3. My life span would be shortened by about 65 years and I would die that very week due to the persistent torture of this noise.

Of course, I held on to  the outside hope that someone was doing this to me on purpose, like as a joke or as a way to cause me to grow so distressed that I ate my own hair.

Since there didn’t seem to be any silence in sight, I anxiously decided to turn to the Internet for a diagnosis.

Delirious from the haunting noise, I started entering my symptoms into WebMD. I wasn’t even sure where to draw the line between the symptoms of my affliction and the side effects of being tortured by a bumping noise for nearly 18 hours straight. Was I paranoid? Probably. Experiencing fatigue? Totally. Headache? Yes. Hangnail? Uh-huh. Dizziness? Sure.

I entered every symptom that looked familiar. And the results? They were terrifying. As I read through each of them, my panic grew.

WebMD suggested that I was suffering from one of the three disorders: 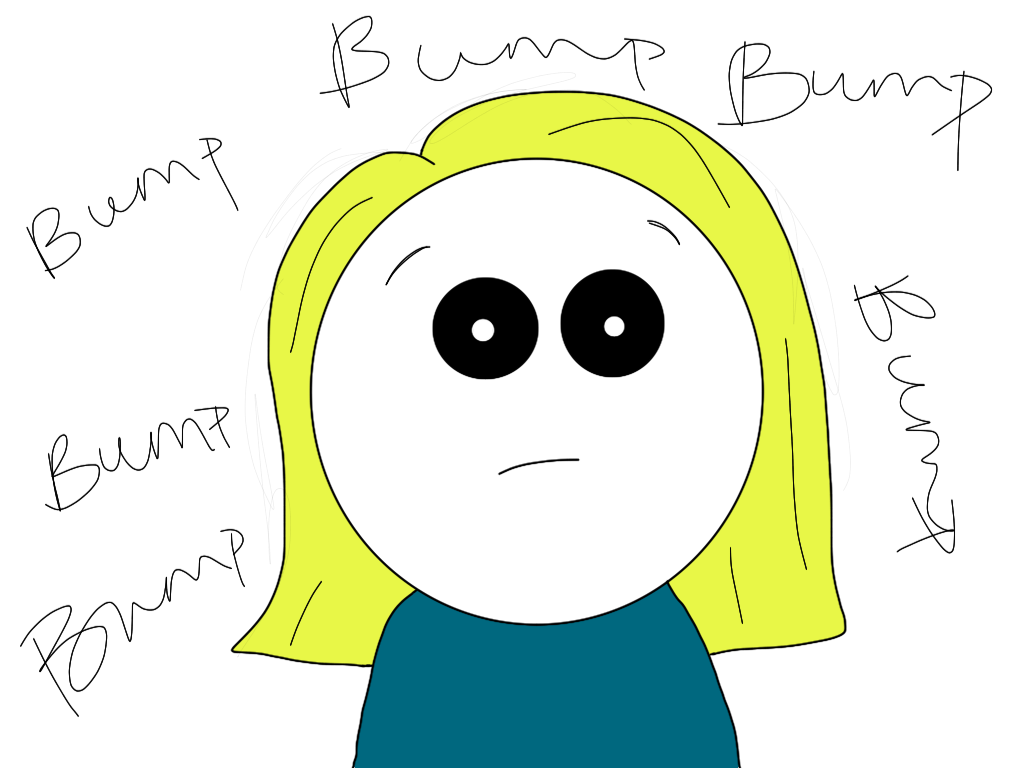 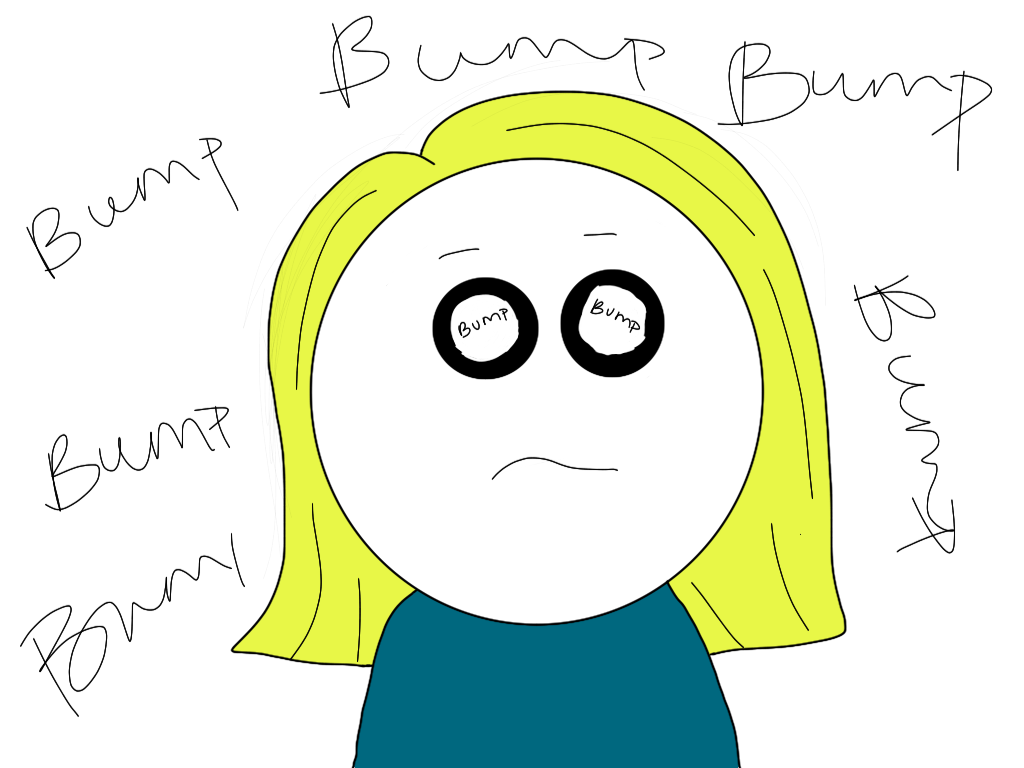 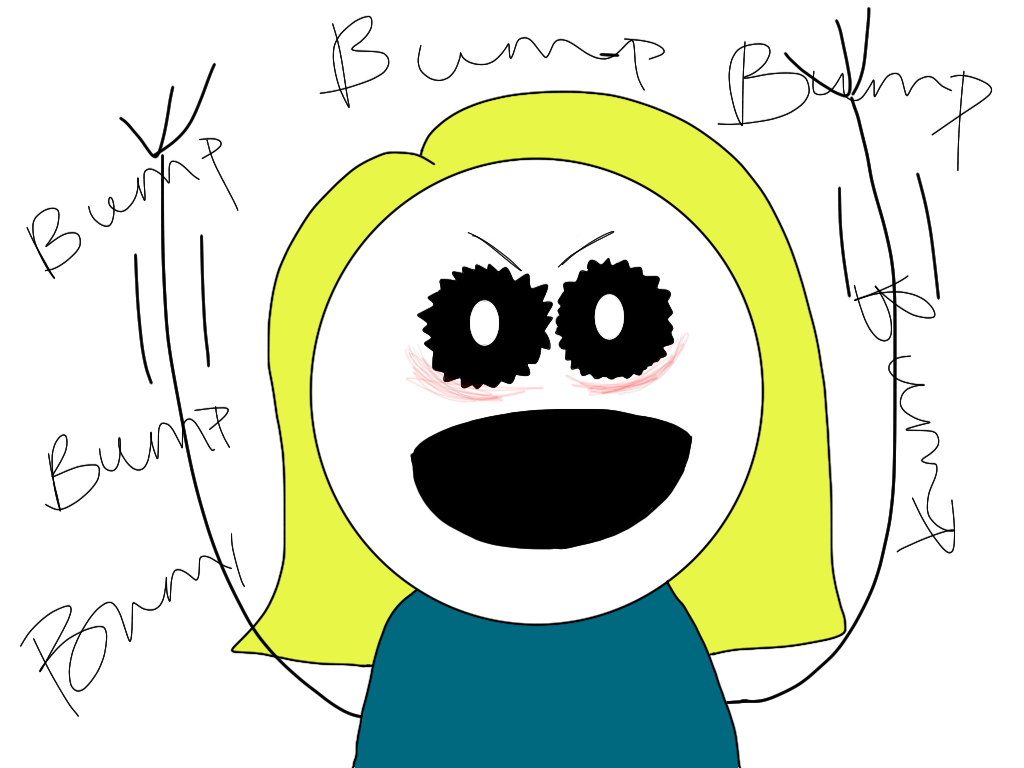 See? This is the problem I’m talking about. Why do you have to be such a pessimist, WebMD? It’s hard enough just being sick. Why would you take a bad situation and make it exponentially worse?

Now, I’ll take some responsibility here to say that maybe I didn’t pick all of the correct symptoms. But how can a person think clearly about her symptoms when someone’s hosting an all-night and all-day rave in her head? WebMD, isn’t it a little odd to assume that I’ll be coming to you with a level head? 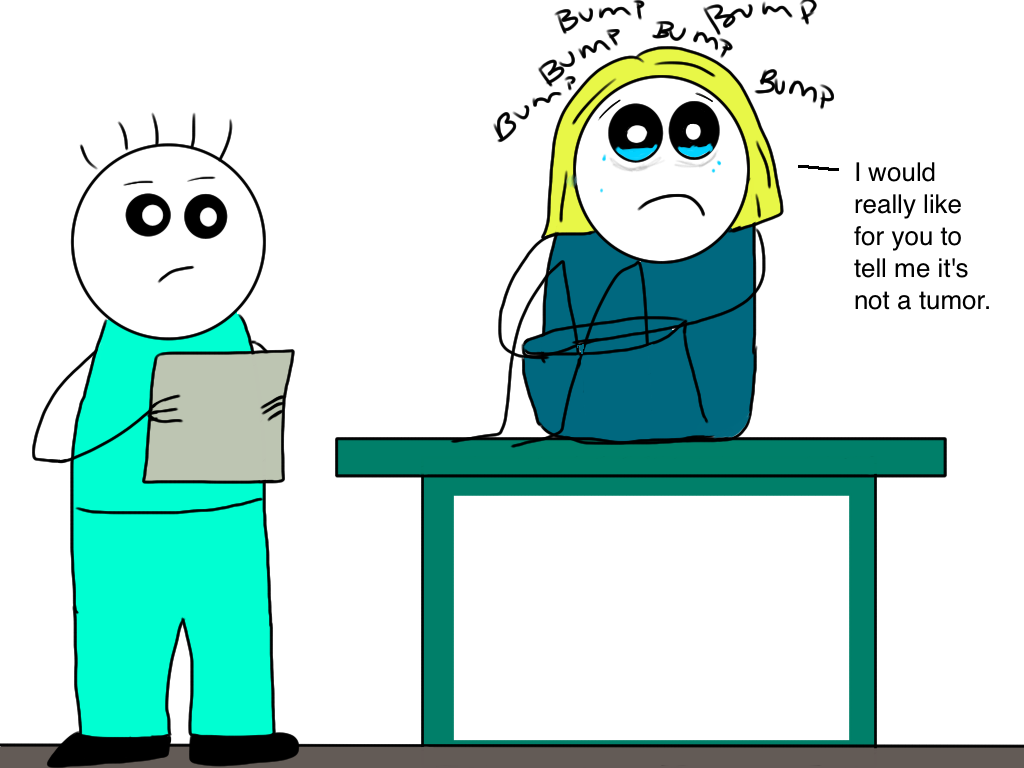 He told me he wasn’t sure what was wrong with me, which was extremely comforting, and then, he referred me to an ear, nose and throat doctor (ENT).

The ENT couldn’t see me until the end of the week. So, the noise and my growing fear persisted for three days. While I still wasn’t ready to believe that I was schizophrenic, by the morning of my appointment, I was sure that WebMD was right about everything else; I had a brain tumor AND tinnitus. 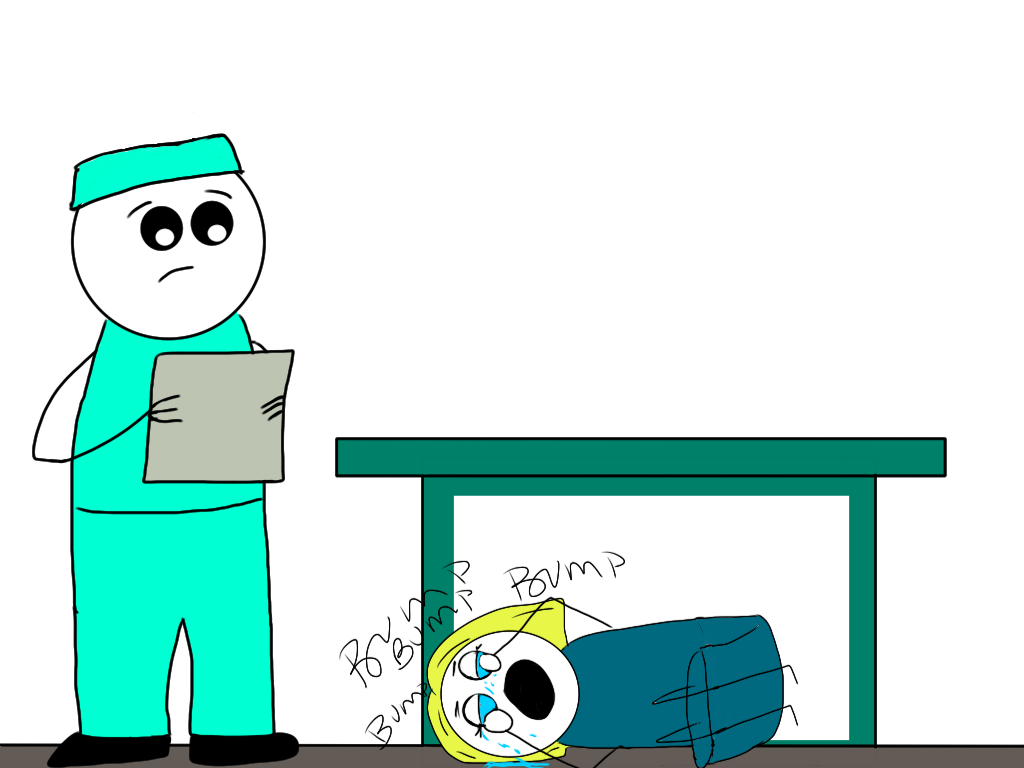 And when THAT doctor didn’t know what was wrong with me, I was pretty sure my life was over.

The ENT suggested I see an audiologist. He thought maybe it was a hearing problem, but by that point, I was sure I had everything that WebMD had suggested I was also fairly certain I was going deaf.

The next week, when I went to see the audiologist, I had, more or less, abandoned all hope. 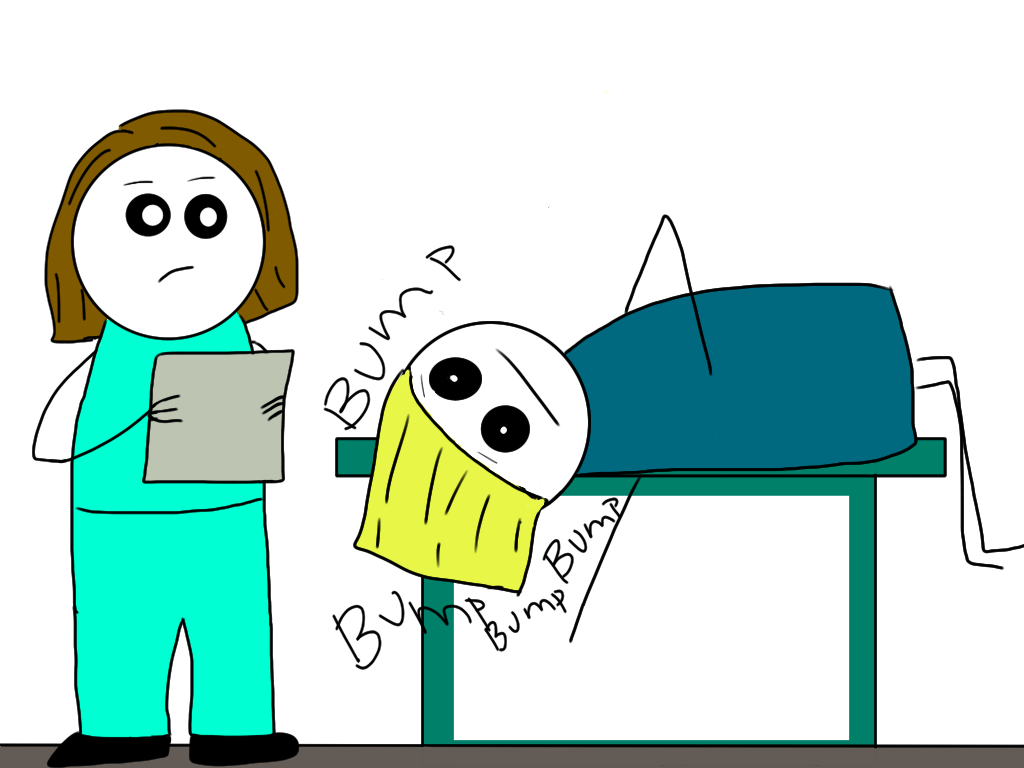 The audiologist tested my hearing but still couldn’t figure out what was the source of my troubles. They recommended I come back a week later for more tests.

By that time, I had gone about three weeks on minimal sleep because of the non-stop bumping, thumping bass sound.

I was thinking all kinds of irrational thoughts about every diagnosis WebMD had offered, and I was so cranky and stressed out that even the sound of my own breathing made me angry.

Basically, I was a delight to be around. 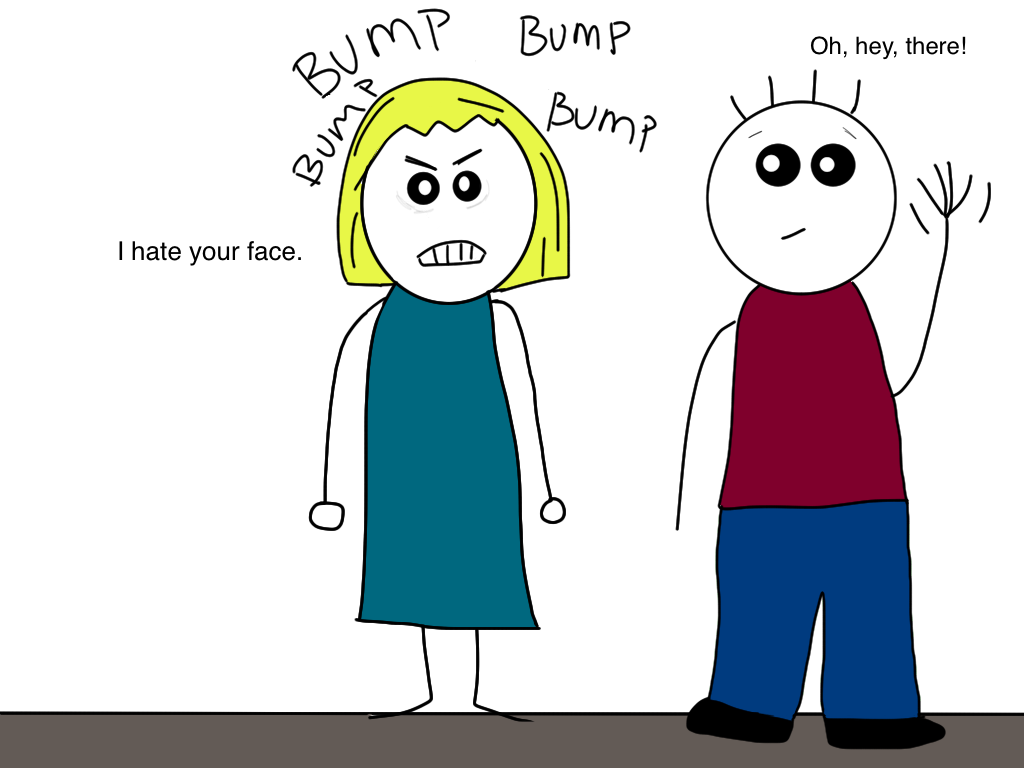 As a last resort, the Mr recommended I see an allergist, because his friends at school had been complaining about pollen.

I took my sad self and my last shred of hope across town for one more doctor’s appointment, and I did my best to put on a brave face. 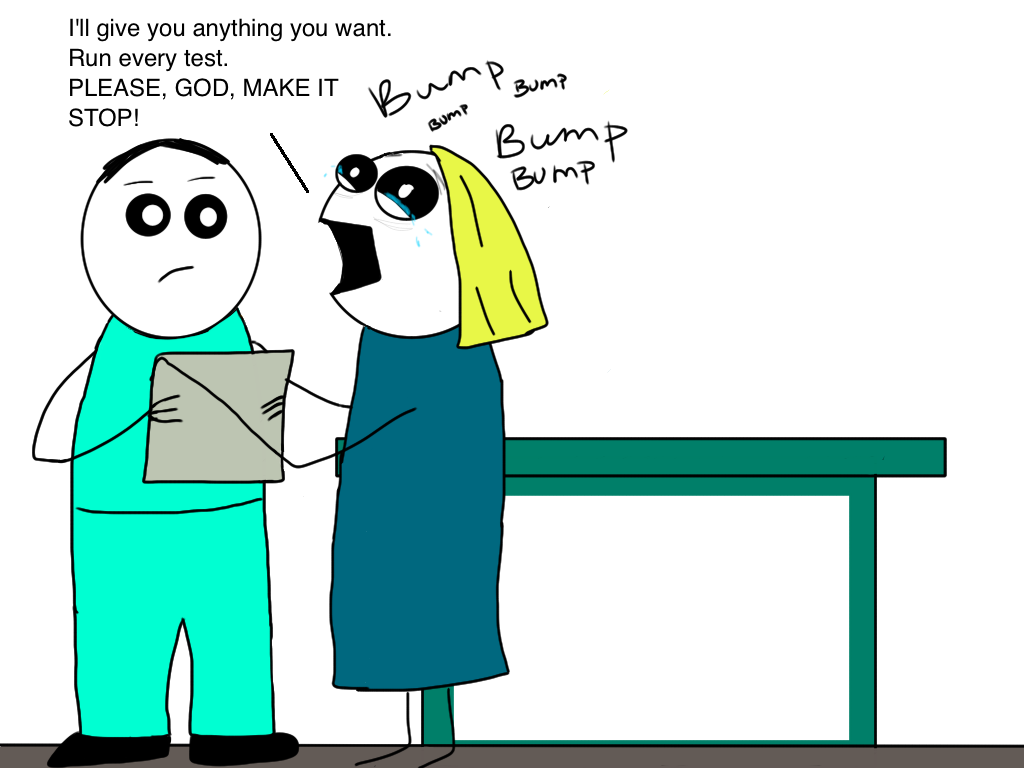 I think it was around the part of our conversation where I mentioned to the doctor that I was questioning my sanity that he broke out every test he had. He must have felt sorry for me. 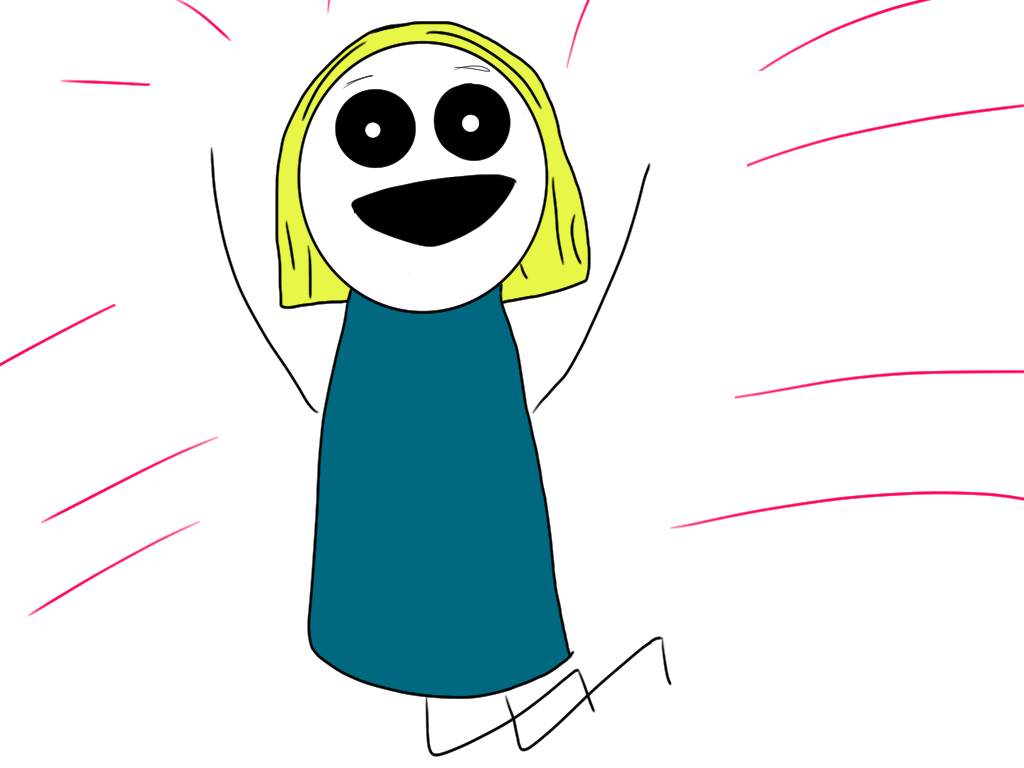 Some pills and nasal spray cured me within a few hours. I could have been bitter that I had been sent down such a crazy rabbit hole, but I was just happy to get a good night sleep. And I was so grateful to the kind doctor who had rescued me from the brink of insanity.

This is why I will probably name my first child after my allergist and NOT that menace WebMD, who didn’t even come close to a correct diagnosis and made the entire experience much more excruciating than necessary, and also why every year when February comes around, I like to think of it as “Congratulations, it’s not a toomah*” month.

*Because Arnold Schwarzanegger delivered the commencement address when the Mr finished law school, I have had the pleasure of hearing him say, “It’s not a toomah” in person(ish). If this is the kind of thing you’re into, here’s a link to the speech (the good stuff happens around the 7 minute marker.)

Share
Tweet
Pin
0 Shares
Tagged with: bad drawings • getting to know the mrs. • that time I thought I was dying • true story • why internet? why?