Procrastination and a complete lack of ambition got the best of me yesterday. I did a lot of things instead of writing an actual post for today. None of them were terribly interesting or productive. Here’s a list of the highlights:

2. Fell asleep in the shower

3. Ate enough mint milano cookies to cancel out my run

4. Drew a picture of a giraffe 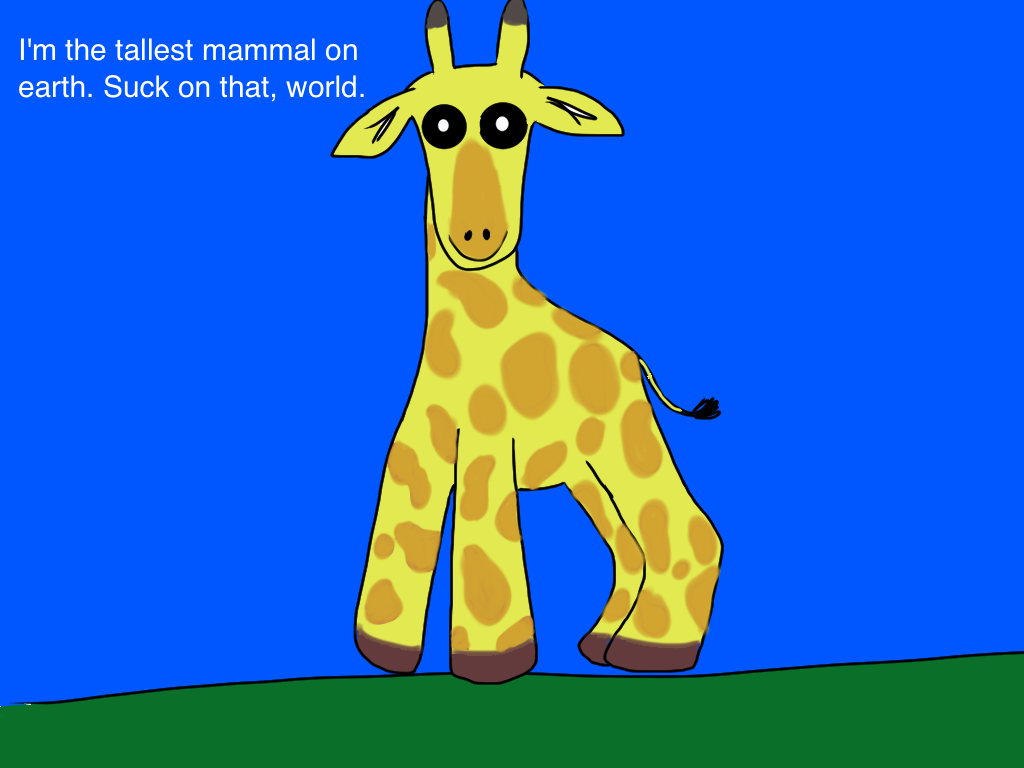 You’ve won this round poor work ethic, but I’ll be back.

like a scary, mascara-less box of chocolates, you never know what you’re going to get

True story: Occasionally, I feel kind of bad for men.

I mean, I know that they’ll never have to birth a child. They typically earn more than women in the workplace. They are not nearly as socially oppressed as women. And they get to pee standing up (which–to my father’s dismay–I tried once when I was 6 or 7, because my older brother was the coolest person I knew.)

But men don’t have it easy all of the time. The Mr has paid for way more dinners than I have. If we ever have kids, I’m totally going to whip out my “I’m Staying Home FOREVER” card, and be all: “Suck on this.” Also, thanks to the magic of makeup, men literally never know what they’re coming home to.

Allow me to demonstrate.

When we first started dating, I was on my best behavior.

The Mr got a lot of… 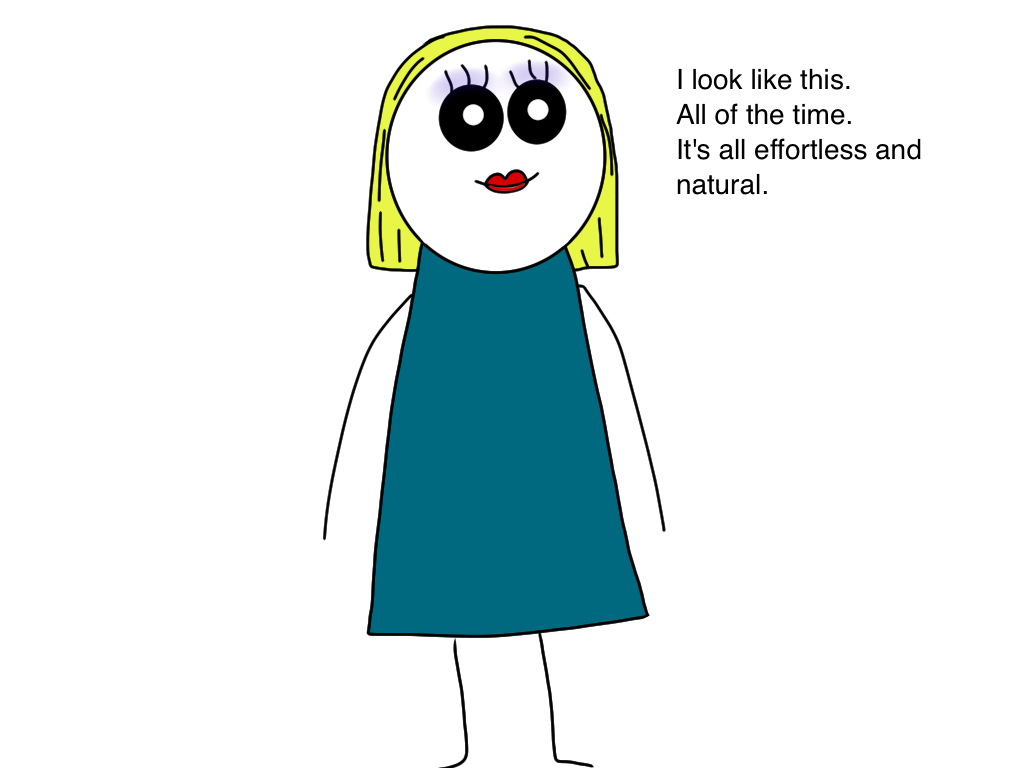 It didn’t matter where we were. The movies. The park. I was made up like a prom queen. I even wore a little concealer to bed.

Then, as the years went on, I backed off of the eyeshadow and lipstick… 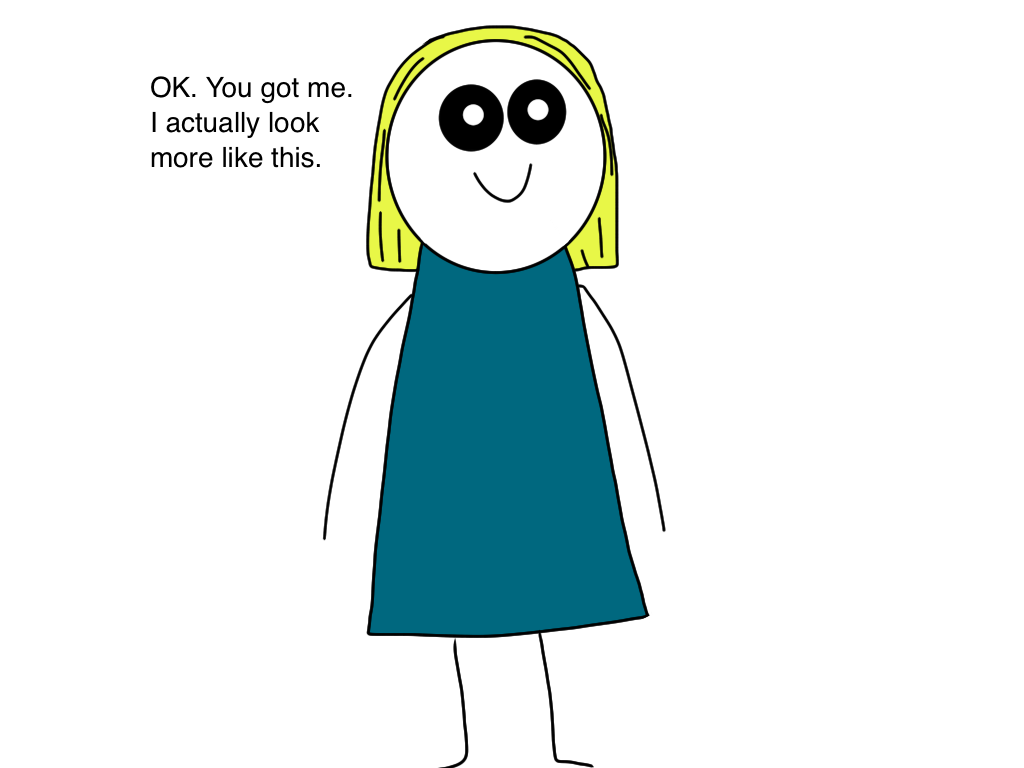 This isn’t one of those “marry me and I’ll let myself go” things. This is more of a “I can’t wear makeup to bed for the rest of my life, because I’ll ruin our sheets” thing.

And the “made-up but natural” me is the look I typically take to the grocery store or around town for the day.

But every now and then, without warning, the Mr comes home to something more like… 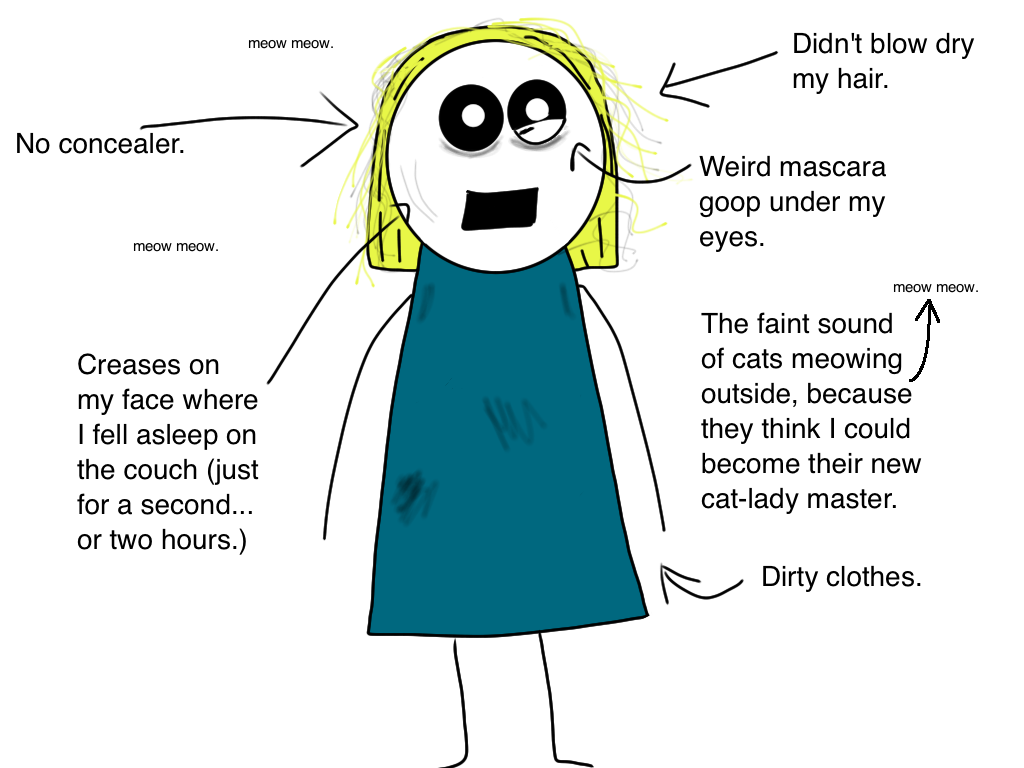 And it seems unfair that men, whose face-altering options are severely limited (so far, I can think of growing a beard or wearing eyeliner–Adam Lambert, Jared Leto, I’m looking at you), should be subjected to such a wide and–at times–frightening range of looks.

The Mr takes it in stride. He’s all: “You always look beautiful”, like the well-trained husband I know him to be. But seriously, y’all. Once in a blue moon, I scare the crap out of myself. So he deserves a trophy for keeping a straight face regardless of the scenery.

Because that shit ain’t right.

P.S. It has occurred to me that I have totally sucked at the Internet lately. I’ve been out of town for at least three days every week for the last month. I haven’t been able to respond to as many comments, read as many blogs or write as many posts as I would like. And I’ll make it up to you. Provided no one else dies. (I’m going to Hell. Seriously. Who says that?)

i don’t want to alarm anyone, but my friends are probably trying to kill me

Mom. Dad. If you’re reading this, then you’ve found me on the internet and the apocalypse is upon us. I know you’re probably a little miffed about the Danny Tanner comments, but since the end is nigh, let’s agree to let bygones be bygones.

I had friends that did all of the things I didn’t do, and on a number of occasions, I received invitations to join them. I always politely declined.

(I’m not judging you if you’ve done these things. I made these choices ages ago, when I thought I might still want to be president…and before, you know, you could still get elected after doing blow out of Gennifer Flowers’ belly button…or Karl Rove’s cufflinks.)

All of this is to say: I’m not easily coerced by my peers.

In fact, when it comes to peer pressure, it’s become clear to me that I have only one weakness: organized sports.

For reasons I cannot articulate, I have allowed my friends to bully me into hours–sometimes years–of physical pain in the name of organized sports.

I first realized my vulnerability to coercion in high school. When, at the tender age of 15, I was thrown to the lions of the rowing world.

It began innocently enough; an acquaintance mentioned that she was going to join my high school’s crew team. “Good luck with that,” I muttered. Inside, enjoying a good chuckle at this poor girl who was about to put herself through hours of physical punishment, six times a week. You poor fool, I thought.

When I saw her the next day, she told me she had signed me up, too. That bitch.

“I thought it would be fun if we went together,” she smiled. As I fumed, Fun for who?

I suspect I could have–probably SHOULD have–un-signed myself up. Surely, no one was going to police the very unofficial orange, sign-up sheet with my name on it. But instead of flaking–fearful of letting down this presumptuous acquaintance–I went to the first practice.

This ought to get her off my back, I thought.

It was a blood bath from the start. Do you know what it’s like to learn to row?

First, it’s pretty exciting, because you’re all: “I saw this in an inspirational poster once. Look, you guys! We’re in a crew shell! We’re floating!” 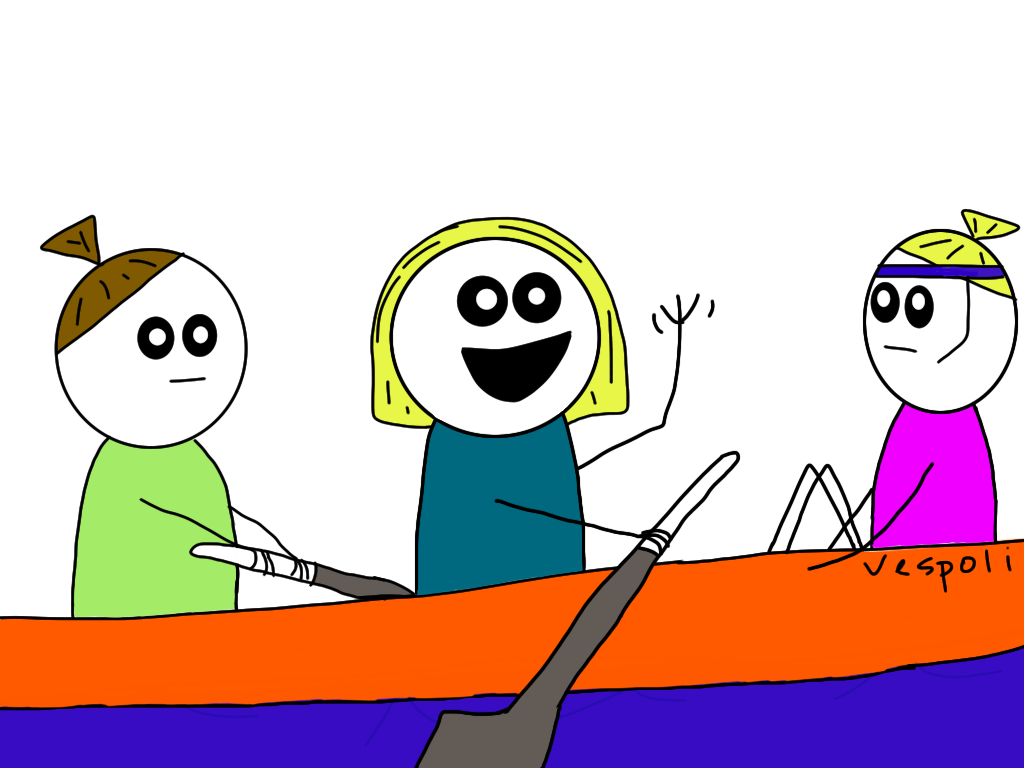 Then, you take your first couple of strokes and, invariably, that leads to what is known in the crew world as “catching a crab”*. Due to your awkward movement and poorly timed rhythm, you find your oar stuck under water. When this happens, though, the shell is still moving. So the water propels your oar into your face.

What kind of messed up shit is that? 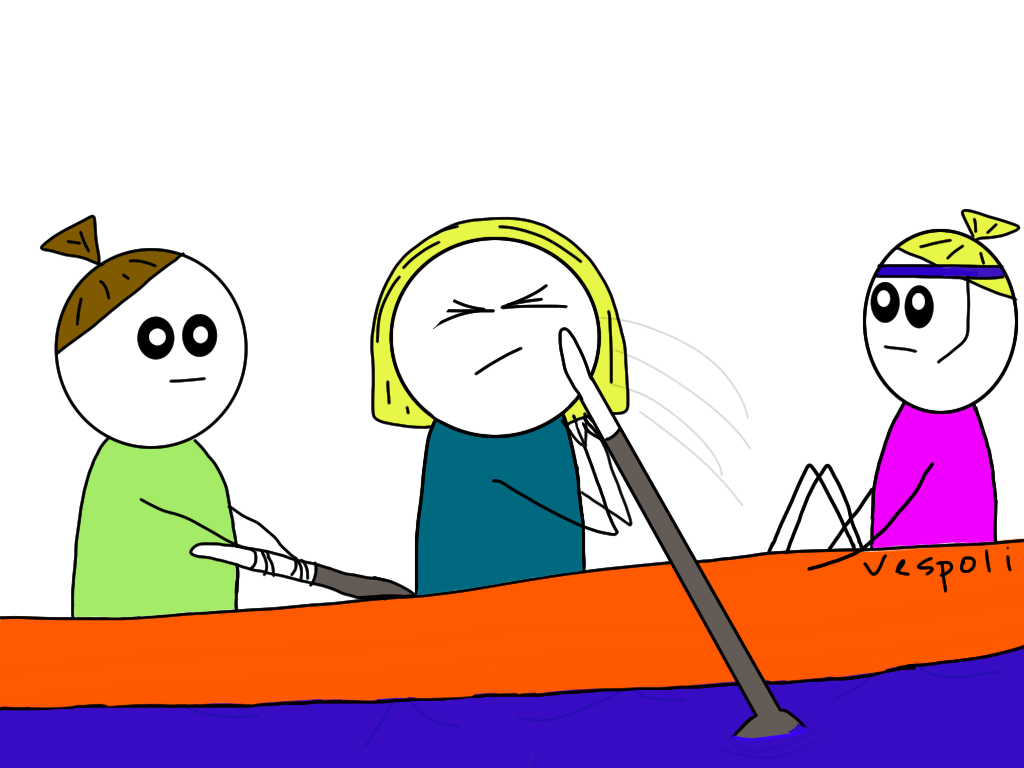 But the punishment doesn’t stop there, because even after you get good enough not be smacked in the face with an oar, you still have to train for three hours. Every day. And did I mention crew is a year round sport? 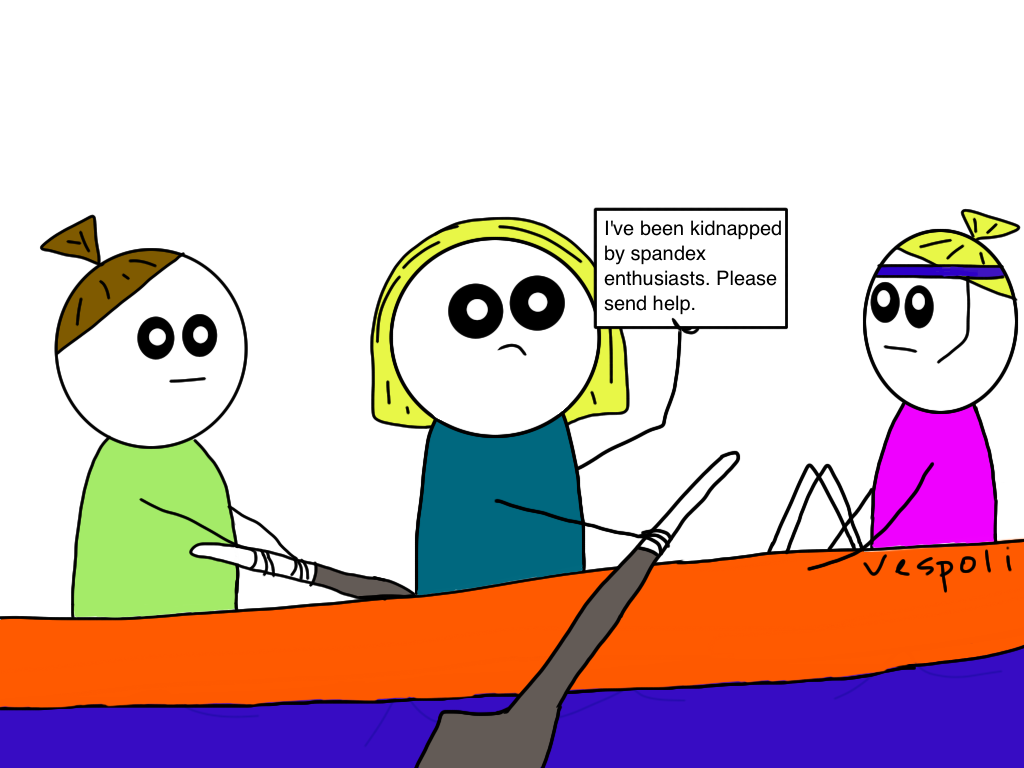 Again, maybe I could have gotten myself out of it. But once you get assigned to a boat, there are other people counting on you to show up. And then, if you’re me, your competitive instincts take over and you want to make the best boat. And once that happens, you want to keep your seat in that varsity boat and win races.

And so it was that I rowed. All through high school.

I would have written my vulnerability to peer pressure off as a fluke.

But then something awful happened: My high school crew coach got me an athletic scholarship. To a college I had never heard of. I didn’t want to let anyone down, though. So I took the scholarship and moved to Miami. And it took me getting tendinitis and having an argument with my college coach to get out of that situation.

By then, I thought I had really learned my lesson: Just say no to sports. Always

But you guys, to this day, I am powerless when confronted with phrases like “it’s for a good cause” and “let’s do it together”.

My friends, well-meaning jerks that they are, have tricked me into countless 5ks.

The triathlon was where it finally became clear to me that my friends were probably trying to kill me. Five miles into the 18-mile bike ride (and after the 1/3 mile swim but before the 5k run), I was enjoying a quiet breather… 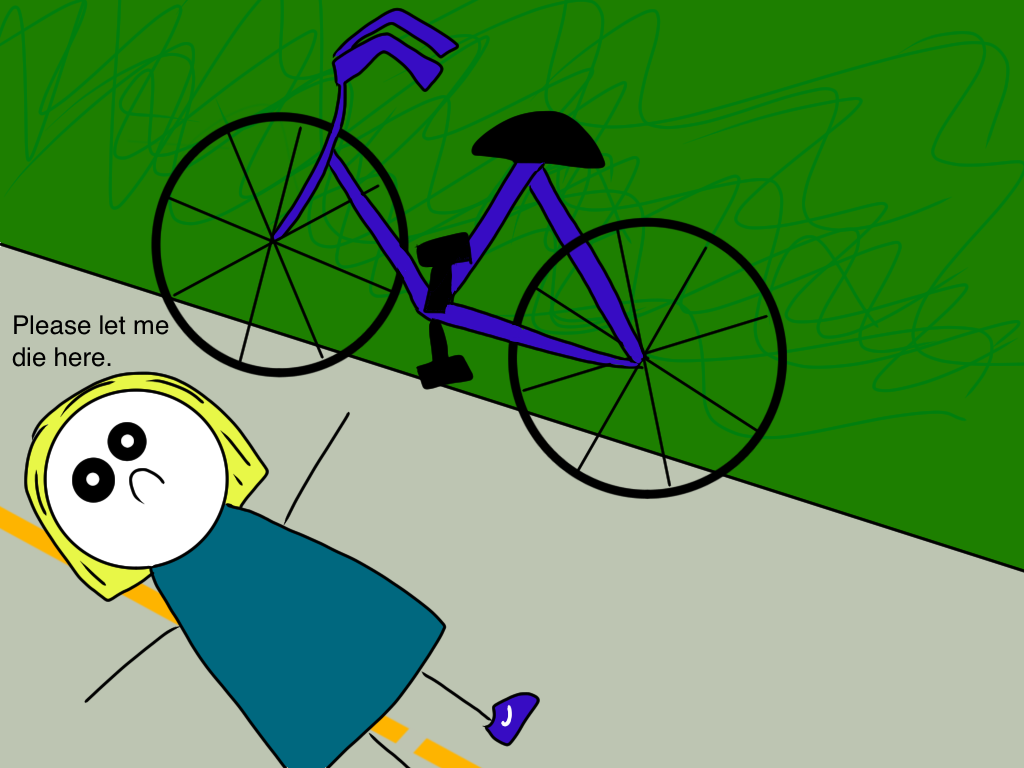 when I started to think: Who would do this to a friend? Friends don’t let friends run triathlons.

I got a phone call the other day, from a girl friend who wanted to know if I would run a 10k with her. All I could think was: How do you people keep finding me? And why do you want me to die?

*In case my “catching a crab” illustration wasn’t enough, here’s this: